GREENVILLE - A young, rural Greenville man has come up with an innovative way to utilize an alternative fuel to power an older Ford pick-up truck he bought. 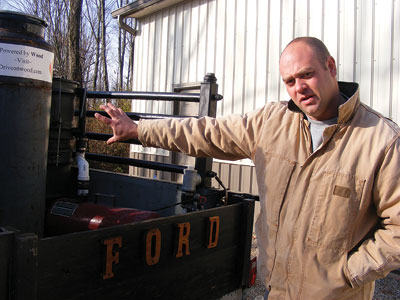 John Cleveland has used a process called Wood Gasification to produce a flammable gas that, when piped to the engine, acts much as natural gas or propane would to power a vehicle.

"The wood gas generator, also known as a gasifier, is in the bed of my truck and produces this fuel in real time on demand," said the 35-year-old. "My fuel is chunks of wood about the size of a baseball. So, my truck drives on wood."

Cleveland said he has worked on this project since about March of the year and finally drove it for the first time about two months ago. "I now have more than 700 miles under my belt driving this truck using wood as my fuel source." he said. ‘To my knowledge, I am one of about 30 or 40 people nation- wide that have converted a vehicle to run on wood. I am the only in Ohio that l know of."

He said he learned about the gasification process about a year ago, having found information on the Internet. "I didn’t know what it was until I did a Google search," he said. "I'm always a tinkerer, so a year ago l bought five-gallon wood buckets and built a wood gas generator, hooked it up to a push mower to see if it would run.

On the third pull, it started. It ran for 45 minutes, using wood chips for a pellet stove. I thought that was cool, and that I‘d take it to the next level for driving around." Cleveland said the gasification process has been around since before World War II.

"In Europe, over a million vehicles were converted to it because fuel consumption was a war effort" he said. "It's not a new technology, but a forgotten technology." He said he didn't invent or engineer the design he has. "I took another man's idea and implemented it" he said. ‘Wayne Keith, a cattle farmer from Alabama, has driven over a quarter of a million miles since 2005. I just found the website during my research. I met him last spring in Argos, IN., south of South Bend at a wood gas convention. There were eight gas powered engines there, but mine wasn't done yet"

Keith, Cleveland said, was "quite a gentleman."

"I used his design and I built it," Cleveland remarked. "I learned how to weld and visited some scrap yards. I estimate I have $1,000, aside from the truck, in it And, I don't know how many hours I‘ve invested in it, maybe 400 hours, in building this."

Can this system work on an automobile?

"I met a gentleman from Wisconsin who had a Chevy Cavalier at the Argos show," Cleveland responded. "He hauls his around on a utility trailer pulled by a hitch on the car. But, I'm not going to do it" Cleveland admitted there is a horsepower loss when wood gas is used in a vehicle. "You‘re looking for a big motor in a little vehicle," he said. "I have a 1980 Ford F-150. It’s a light vehicle and a good candidate for wood gas."

He said his goal, however, is to go with a more modern truck and gasify that. His dream vehicle would be a late 1990s Dodge Dakota with a 318, V-8 engine. He went on, "My only goal in this is to show people that there are other alternative energies available beyond expensive hybrid or electric vehicles for those who are a little hit handy and have access to a supply of wood."

Cleveland and wife Sarah live in a wooded area surrounding the home it took him three years to build, so wood is no problem for him.

Instead of figuring how many miles he gets to the gallon, he uses 1 pound or 1 1/2 pounds of wood per mile, measuring his efficiency with miles per pound. He keeps the wood chunks in a chicken feed sack. Shavings and chips don’t work well, according to him.

"It takes a little time to cut up the wood, but I enjoy it on weekends," he said. "I love the outdoors."

Cleveland said his truck is not 100 percent wood gas powered, only 90 percent. He still keeps gasoline in it. And, he built another pedal for the wood gas.

"I kept the ability to keep two gas pedals at will" he said. "I installed another gas pedal to the left of the brake for the wood gas. If I need extra get-up, I use the other pedal. I always start it on gasoline, but use the woodgas 90 percent of the time."

He works for Shook Construction out of Dayton, and holds a bachelor's degree in construction management from Bowling Green State University.

Taking a look at his truck, the wood gas generator he built and mounted is there along with other apparatus, including a condensation collection tank, racks from he got from field gates on both sides to also serve as a radiator, a filter as well as another collection tank underneath the vehicle. Underneath the hood of the truck is a lot of PVC pipe leading to various items underneath.

"I'm not a mechanic, but I did this all by myself with no help except for online correspondence to do the modifications," he said. "Wood gas is flammable. Gas extends from the wood when it is heated. I'm starving the fire of oxygen so there is an incomplete combustion. Gases are released from the wood when heated."

The three gases he said he harnesses are hydrogen, carbon monoxide and methane to run the truck. Two other gases are carbon dioxide and nitrogen.

He lights the generator with a propane torch when he's ready to go for a ride, and sometimes even to church at St Paul‘s Evangelical and Reformed Church in Piqua. ‘The beauty of the system is the gas is generated on the bed of the truck," said Cleveland, who attended Troy Christian School through eighth grade and graduated from Troy High School, in 1997.

The Clevelands, who are expecting their first child at the end of January, burn wood in their house to supplement the electrical heat they have. "This hobby has evolved into more than that." he said. "It's between a hobby and everyday life."

Those wanting to contact him can do so at his email address jcleveland78 AT hotmail DOT com, and those who want to learn more about the process can go to driveonwood.com