NEAR MORTLACH — Cal Rader has two options when his truck is low on fuel: go to a gas station or pull up to a wood pile.

“(It’s) a lot of fun, especially when you can go down the road and you can pass the service stations and you can give a wave,” Rader, 72, said Tuesday at his home north of Mortlach.

Rader is the proud creator of a hybrid red and silver 1992 Dodge Dakota that runs on both wood chips and gasoline. 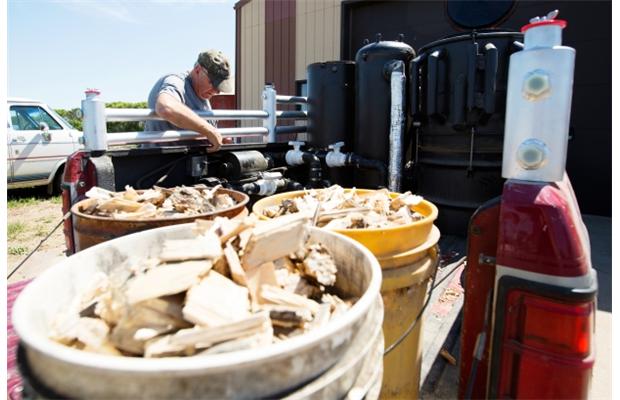 “Everybody talks about the price of gasoline and possibly someday the shortage of gasoline ... plus what carbon does to the environment. And, this really interested me,” he said.

Rader, a mechanic and retired instructor at SIAST (now Saskatchewan Polytechnic) in Saskatoon, began the project in October. Then, last week, he started the truck with wood gas for the first time.

“When you hear the first few putts from the engine ... and as you start going down the road, I’ll tell you, the old adrenalin is really flowing. It’s quite a thing when you imagine going down the road and not having petroleum in it.”

One pound of wood chips provides close to 1.6 km of driving and 16 pounds equals nearly four litres of gasoline, he explains.

The box of the truck has been customized for the wood conversion process with equipment such as three hand-built tanks, cooling rails, exhaust tubing and gas lines to the engine.

To begin the process, Rader pours two, 10-pound buckets of Spruce wood chips into one of the tanks called a wood hopper or gasifier. The wood chips are scorched to produce hydrogen, carbon monoxide and methane gases.

The gas mixture is transferred to another tank and cooled. It then passes through a hay filter to remove any soot from the wood burning and then eventually to gas lines connected to the engine.

The gases replace the gasoline normally needed for the internal combusion to make the engine run.

Rader notes that the technology is nothing new and is more popular in the U.S. But in Canada, he believes his hybrid wood-burning truck is the only one in the Prairies and one of five in Canada.

Rader did the work himself using “mostly junk,” including a vacuum cleaner motor and plumbing valves, to create the hybrid. He estimates the conversion cost between $1,500 and $2,000.

Rader purchased the 1992 Dakota because it is lighter than other trucks and can accommodate the extra weight in the box. Since wood produces about 30 per cent less energy than gasoline, the truck’s powerful V8 engine helps with maintaining a normal speed.

Rader has added his own personal touch to the truck’s appearance with the slogans “Burn Baby Burn” and “Smile with Every Mile” painted on the sides as well as “Powered by Wood” on both doors.

Although an experienced mechanic, converting the truck was something new. Rader was inspired by Wayne Keith, an Alabama-based enthusiast who has online tutorials, but also got advice chatting with other mechanics on driveonwood.com.

Even so, Rader admits that operating the truck is more difficult than the build.

“I’m a little bit green at this. I’m still learning,” he said while driving on a dusty grid road. “The build accounts for about 25 per cent and learning to operate it about 75 per cent. And, I’m in the 75 (per cent).”