HUMANSVILLE, Mo. -- Forget paying high gas prices. One man here found a way to save gas money by driving on wood instead of fuel, and he says you can do it, too.

A piece of scrap wood might not look like it's worth much, but to Doug Brethower it's worth hundreds. That's how much he says he saves when wood is turned into fuel for his truck. 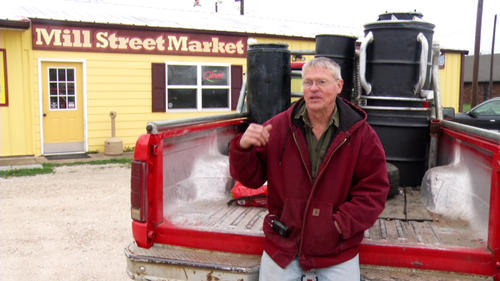 If you take a drive with Brethower, you won ask about gas prices, but rather about how his truck is running without gas.

"It's nice to be able to drive without having to be hooked up to the pipe line," said Brethower.

He uses a homemade system that turns wood scraps into fuel through a process called gasification.

"You just put a little bit of heat in there and basically boil some gases out of the wood and run the wood to the engine," said Brethower.

He says it saves him about $500 a year. Although it may look complicated, he says it's something you can do yourself with a little ingenuity and a lot of time.

He teaches the gasification basics at Mill Street Market, a disaster preparedness store in Humansville.

She says she hopes drivers will walk away with more than a way to save gas money, but also a different way to survive a crisis.

"We know that in crises now, like hurricanes and tornadoes, there's no fuel. Even in ice storms, the first thing to go is fuel, and, if you have a vehicle setup on wood, it gives you another option," said Wohnoutka.

It's something that Brethower says is not as easy as pumping gas but worth it to drive using only wood. He says he got the wood-fuel idea from the way it used to be done in World War II. He says he doesn't just use wood to power up his car but even the electricity in his house runs on saw dust saving him even more money.

The gasification class on turning fuel into power will be Friday night at 6:30 at the Mill Street Market in Humansville.