WHILE MOST PEOPLE ARE PAYING NEARLY $4 FOR A GALLON OF GAS, JONATHAN SPREADBOROUGH IS CHOPPING WOOD AND THROWING THE PIECES INTO A GENERATOR TO PRODUCE WOODGAS, WHICH POWERS HIS 1990 FORD F-250 TRUCK. 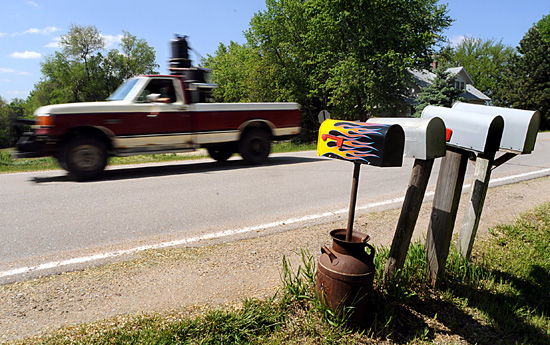 He’s got this monster of a contraption on the bed of his red and white Ford F-250 that most people say looks like a still.

While most people are paying nearly $4 for a gallon of gas, Spreadborough is chopping wood and throwing the pieces into a generator to produce woodgas, which powers his 1990 truck.

He built it over the winter in Dutch Bentzinger’s shop here for about $500 and began driving it to Lincoln and Crete about a month ago.

“One gunny sack of wood gets you there and back,” Spreadborough said of the 30-mile round trip to Lincoln.

He keeps three sacks of circular elm chunks in the back of his truck near the tailgate. He said he aims for 2-by-2-inch to 4-by-4-inch chunks of wood but can use chunks as big as 6-by-6 inches — as long as they’re mixed with smaller pieces.

Any tree species will work, he said.

Woodgas generators are not a new invention. They were common in Europe during World War II, Spreadborough said, when gasoline was scarce. His neighbor, Mildred Sittler, said she saw them in Japan when she and her late husband, Lloyd, were stationed there in 1949-51.

“Isn’t that fantastic,” she said. “It’s something that’s good for the future. … We need it.”

Woodgas is a fuel (think propane) produced by partially combusting wood in an oxygen- controlled environment.

“I guess, you could think of it as wood smoke but it’s not,” Spreadborough said. “Wood smoke is a product of complete combustion.”

“The beauty of the woodgas is a zero emission,” Spreadborough said. “Any carbon dioxide that is produced is what the tree consumes in its life cycle.”

Spreadborough doesn’t see his woodgas generator as the answer to this country’s energy problems. And he realizes not everyone would relish driving around with a woodgas generator rigged to their vehicle — even if it saved money.

“It doesn’t have to be that big,” he said. “A smaller unit means you have to refuel it more often.”

Spreadborough said he built the system because of skyrocketing gas prices and a personal goal of trying to make his family more energy-independent.

Wood was as an alternative fuel.

“I live on an acre and a half. I have wood all over the place. My neighbors have wood,” he said.

The stay-at-home dad spent 40 to 100 hours building his generator from scrap parts, including metal barrels of various sizes, lots of pipes, filtration equipment to remove soot and a radiator mounted on the front bumper.

On his Web site, he traces his interest in making fuel from wood to his childhood.

“I made my first woodgas discovery… while on a family camping trip. We had an extra tent pole and I was using it to play with the camp fire, I discovered that if I stuck the pole into the fire, smoke would rise out the other end.”

Then he learned he could light the smoke on fire.

“It was pretty cool, I had a nice flame pole, the flame was 5 feet away from the camp fire.”

Today, to start the generator that powers his truck, he uses a monkey wrench to take off a 2-inch metal cap that covers a pipe, allowing him to attach a fan that sucks out air to create a vacuum.

Then he uses a propane torch to ignite twigs or old newspaper near the bottom of the gasifier.

The fan, which operates from a cigarette lighter in the cab, creates a little smoke, but Spreadborough says it disappears once the system is running. He also says there is little chance of an explosion.

His fuel-injected truck is modified so it can burn either gasoline or woodgas. He said it needs gas when he first starts the engine.

Driving solely on woodgas costs a vehicle 30 percent of its acceleration, so he said he rigged a computer chip to allow him to customize his fuel mixture. He also mounted a vacuum gauge on the hood and another inside the cab to keep tabs on the negative pressure.

Spreadborough said he doesn’t have to pay tax on his fuel because there’s no tax on wood.

A spokeswoman for the Nebraska Department of Revenuer’s Motor Fuels Division said there may be some tax consequences, but without knowing the specifics of the woodgas system she couldn’t say for sure.

This isn’t the first woodgas generator he’s made. He built one for his 1976 Dodge Swinger RV, but the radiator weighed 700 pounds, and the back end and trailer hitch were too low to the ground.

He plans to redo the RV and is working on a pilot woodgas system to power an irrigation system for a Norfolk physician interested in renewable energy.

Said Spreadborough: “I just want to open people’s eyes. There’s other way to do this. We don’t have to be slaves to the oil companies.”