A lot of people complain about the high price of gasoline but Ron Lemler did something about it. 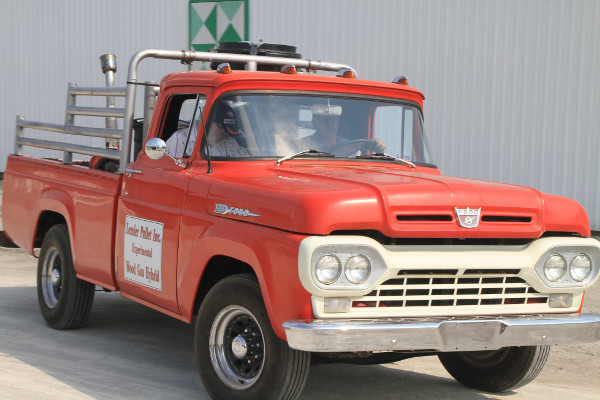 “I don’t have to use any gas (gasoline),” said Lemler. “I feel bad for everybody else you know, that has to pay the price, but whenever it (the price of gasoline) goes up more, I just drive my truck more,” said Lemler.

Lemler has a 1960 Ford F250 pickup truck with a complex wood burning contraption bolted down in the back bed.

On this day, Ron poured small pieces of oak into a cylindrical “wood gas generator,” which was located just behind the passenger cab, and actually stood higher than the roof of the cab.

“I used just stuff that we had laying around the shop here; the tank itself was made out of an old water heater and then, so is the filter, and these here were just some old sawdust augers.”

After Ron filled the generator with wood, he used a blow torch to light it through a small opening in the middle of the tank.

“You see the charcoal behind there, that charcoal is red hot already,” Lemler said.

The entire process is a bit like lighting a bar-b-que grill, but in this case, the contraption extracts gas from the burning wood, cools it, and then feeds it to what’s behind the grill of his pickup.

“The main reason I did it is because when I heard about it, I really wondered if it would work,” Ron said.

Lemler pushed down a lever mounted to the left of the driver seat that switched the fuel source from gasoline to wood gas. He then turned the key.

Although truck didn’t start on the first try, it wasn’t long before it did, and he was lumbering down the highway.

“It has a little bit of smell,” said Lemler. “Like bar-b-que almost.”

On the downside, no matter how they’re made, wood gas generators are big and bulky. 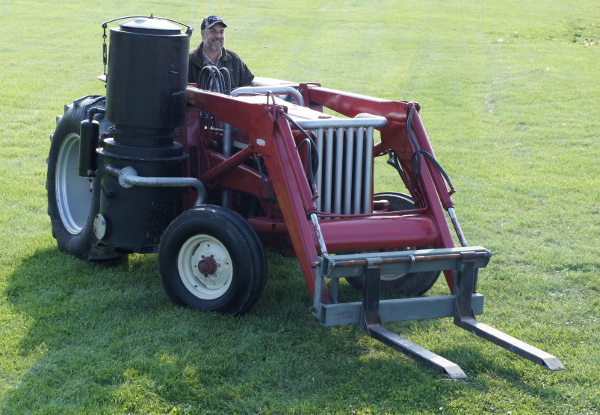 No matter what the season, the truck has to warm up for about five minutes before it is ready to roll.

Furthermore, a wood powered vehicle won’t go as fast as its gasoline counterpart. The top speed of Ron’s pickup is about 65 miles per hour.

On the plus side, if he so chooses, Ron never has to stop at a gas station. “The fuel tank holds about nine buckets (of wood), and it’ll take me between 80 and 100 miles, it varies that much. I think it has to do with, a lot, with headwinds and the type of wood I’m burning and how dry it is, how much moisture content is in the wood.”

Ron has never driven the truck further than he did last month when he and his wife Ronda took a trip to Mackinaw.

“We can just hop in the truck, fill it with wood that just is scrap, and we can go wherever we want, pretty much,” said Ronda Lemler.

The trip totaled 900 miles. All but 30 miles were driven using pure wood power.

The Lemler’s stopped three times to reload the wood gas generator on the way up to Mackinaw, and twice on the way back.

Using gas, Ron’s truck gets about 12 miles per gallon, with wood, performance is measured in miles per pound.

On the Mackinaw trip, Ron’s truck went about one mile for every pound and a quarter of lumber.

When asked if wood was a cheaper fuel source than gasoline, Ron replied, “Well, for me it’s free.”

Ron operates a wood pallet business and therefore gets his wood from the scrap heap for free.

It was when business was slow back in 2008 that he first got the urge to become more energy independent.

Ron took advantage of the free time he had to go beyond simply complaining about high gasoline prices.

“He’s a doer,” said Ronda Lemler. “He don’t say a whole lot, and he, you know, he’s thinking all the time, but you never know for sure what he’s thinking about. But once he makes up his mind, he’s a doer, and he’s done it and I think it’s great.”

Ron Lemler displayed his truck in last years Nappanee Apple Festival Parade and he will do so again this year.

“I’m not really sending a message to Saudi Arabia, but it would be nice if America could use the resources that they already have on hand,” Ron Lemler said. “I can drive for nothing.”

The technology is nothing new: Wood chip gasification was actually popular in Europe during World War II.

Ron got the plans for his unit from a 1981 issue of Mother Earth News magazine.

Ron has been tinkering with his wood burning truck for about three years now and believes he has most of the bugs worked out.

Perhaps it is fitting that the 1960 red pickup truck he uses was formerly used as a fire truck.

The Lemler’s live in Bourbon, Indiana.