The Revolution May Well Be Gasified

A certain breed of do-it-yourselfers are powering their homes and cars with wood pellets, corn, grass, and any other biomass they can get their hands on — with near zero percent emissions. 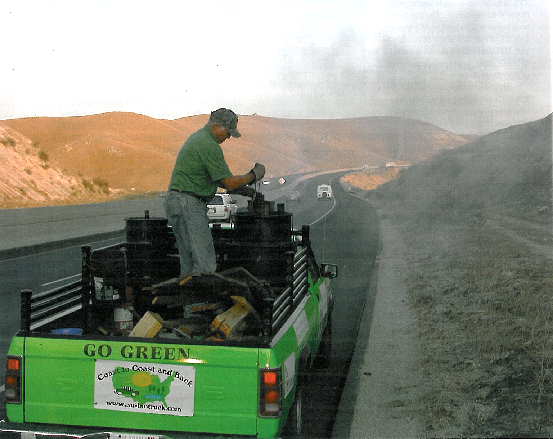 The model of progress that many people keep in their heads looks something like the Victorian-era depiction of the ascent of Man. Just as nature progressed from fish and reptile to Australopithecus and finally modern humans, we leave our older systems and technologies in the dust as we pick up the shiny new advance.

When observers look at the energy landscape, then, they might be excused for turning a hopeful eye only to shiny new potential energy sources: satellite-based solar power, fusions hot and cold, and geothermal wells sunk three miles deep. Coal power, after all, has become linked with unacceptable levels of pollution. Oil producers have struggled to meet demand. New nuclear power plants are proving almost impossible to build economically. Stories of water contamination due to natural gas drilling have turned “frac” into a four-letter word. And modern renewables such as wind and solar are at the mercy of the weather and the diurnal cycle.

While these advanced technologies are having their problems, a cadre of tinkerers is looking to end their own personal dependence on grid power by exploiting a resource left behind on the evolutionary path: Wood. And plants. And algae. Anything burnable. Though they might not be quite ready to divorce themselves fully from the grid - let alone power the nation - they are certainly making nice clean electricity and even powering their cars.

Put the words “wood” and “power” anywhere near each other and the mind turns to images of thick grey smoke billowing out of a chimney or exhaust, filling the air with carbon emissions. But the process that has inspired do-it-yourselfers to do it themselves isn't burning, per se, but gasification: the decomposition of biomass into gases that can then be burned cleanly. What’s more, these gases can be sent directly into conventional engines much the way natural gas can.

Gasifying biomass may not be a perfect replacement for fossil fuels, but it sure beats walking.

Turning carbon-bearing solids into carbon-rich gases is nothing new. The gaslight era was lit up by gas synthesized from coal. Vast gasworks sprung up in every major city in the 19th century, generally in the poorest neighborhoods. Many of those sites are now brownfields contaminated with coal tar and other toxins.

In spite of that grim industrial history the genesis of today’s gasifier subculture can be traced to the Mother Earth News, the magazine of countercultural technology, which in response to the energy crisis of the 1970s published several articles on generating electricity with gasified biomass.

One of the companies that first got the attention of tinkerers was ALL Power Labs with the Gasifier Experimenter’s Kit, or GEK. The company, based in Berkeley, Calif started by offering free, open-source files to anyone wanting to build a gasifier from the ground up Now it sells the pieces as well of what it calls a “‘LEGO system of biomass thermal conversion.” Trying to turn solid fuel into energy-rich gas will teach the hobbyist the ins and outs of gasification.

The chemistry is simple enough. The first thing to understand is that when you heat a carbon-y chunk to a high enough temperature, it begins to break down into methane, carbon monoxide, hydrogen, and other gases, which will readily combust with oxygen to produce a flame Choke off the oxygen supply, and you can collect the gas to be burned according to your want. The synthesized gas, or syngas, can be burned efficiently and with extremely low emissions.

Joel Tallaksen, the biomass project coordinator at the University of Minnesota, uses a GEK-design gasifier as a teaching tool. The branch campus at Morris, where Tallaksen teaches, has its own gasifier that supplies the majority of heat and electricity for the campus of some 1,700 students.

“It supplies 80 percent at peak demand,” he said. “For us that means in the middle of January we’1l probably have to run our natural gas boiler, but for most of the year that should be enough for us.” Tallaksen uses the GEK to introduce his engineering students to the concept of gasification and help them understand what’s powering their school. After a one-hour lecture, the students get their hands on the hardware and begin learning when and how air is sucked into the system as well as the zones where the chemistry takes place.

Students may soon find themselves wrangling not only with the science but with the equipment at their fingertips. Getting the right “feed suck” can be touch and go. Maintaining the right moisture level and filtering out the tars can be just as tricky.

“The GEKs have their issues,” Tallaksen said, “but that experience of having something that is maybe not quite as user friendly teaches people what they need to do to make it work well.” GEKs have been teaching people what they need to do all over the world. And they've been used to power homes, engines, shops, vehicles, and stoves (outdoors only, as deadly carbon monoxide is one element of syngas). But the GEK may ultimately be for the hobbyist, as a good learning machine is not necessarily an efficient machine.

Not everyone needs a teaching tool. For those who want more of a turnkey solution - “turnkey” being a relative term in the tinkering and modification-heavy world of gasifiers - there’s Victory Gasworks. Ben Peterson started Victory Gasworks in 2008. He and his wife had recently retired from the publishing industry and moved onto a 20-acre farm. “I had to take down all these buildings, and I have trees falling down every year,” Peterson said. “I had tons of wood, and I was searching for anything that would turn wood into energy.” Peterson found the Mother Earth plans and began building his own gasifier. “When I started, it was just me,” Peterson said. “I began putting out YouTube videos and people would find it. It’s just grown organically all this time.”

Peterson initially purchased a GEK and discovered that the kit was not something he could turn into the refined and sophisticated machine he had in mind. He began to tinker with the design, introducing a more efficient filtration system and a different overall shape for better suck and evenness of temperature. Ignition ports were placed in a more accessible spot. As a result, Peterson’s gasifiers break down tars more completely, which is better for the atmosphere as well as the gasifier.

A good portion of what makes Peterson’s gasifiers the sleek, efficient contraptions they are remains proprietary secrets. But Peterson likes to emphasize that if the revolution is to be gasified, the gasifier itself is only one element. “I realized pretty early on that there is a cool market here to be had,” he said. “It took me another year to understand that this is more than about building gasifiers. It’s building an entire market from the ground up.”

To further the cause, Peterson also engineered a community of enthusiasts by allowing them to trade knowledge at VictoryGasWorks.com. (At the moment, though, the community site is down. Peterson says it robbed him of time for his gasifiers and his kids.)

Peterson envisions a time when micro-economies will create little hives of efficiency. “Maybe when a critical mass builds up, one guy owns the pellet machine and supplies the other people,” he said. “Right now people can choose their level of interaction, by putting user groups together.”

With or without a micro economy, Peterson’s gasifiers are already out in the world producing electricity. The latest product, the Hotwatt, can supply a typical home with all its energy needs on about a bathtub of wood chips a day. Peterson estimates that a mere two acres of wood can supply the biomass for a year of heat and power.

Is two acres worth of wood per year actually sustainable? That, as with all things, depends. If it takes thirty years for the woody biomass to grow back to harvestable levels, then 60 acres of woodland will have to be devoted to feeding one family’s gasifier.

For families in rural Maine or Wisconsin, that might not be so much of a problem. On larger scales, it might not be possible, though in Europe, biomass-fed gasifiers are producing megawatts of electricity. In fact, a plant in Svenljunga, Sweden, churns out 14 MW, and Vaasa, Finland, is soon to have what will be the world’s largest biomass gasifier power plant, a 140-megawatt generating station to be commissioned before the end of the year.

Surprisingly, though, some people are taking their gasifiers and turning them into on-board refineries in their vehicles.

In the past, wood gasifiers have been used to power vehicles in a pinch. In World War II-era Europe, for instance, as gasoline became scarce, millions of vehicles began running on syngas, though not without some undesirable kinks. In particular, cars could not be allowed to idle if the gasifier and engine were to be kept running. Neutral was not an option: anyone driving downhill had to keep the pedal to the metal or risk stalling.

Those challenges are still present for anyone hoping to power their daily commute with GEK or Victory Gasifier and a log or two. But in Alabama, Wayne Keith, a retired police officer turned farmer turned biomass gas enthusiast, says he has these problems solved.

“Been five years since I've driven anywhere on gasoline and I’m enjoying every minute of it,” Keith said.

Keith, like his peers, insists that gasifiers are not for the hands-off user. “If you don’t understand the process,” he warned, “you’re going to crash.” But his trucks and cars are as turnkey as any gasifier-run vehicle so far. Keith has automated much of what goes on in his gasifiers to maintain the balance needed to produce an even flow of gas. The dashboard has an indicator that reports the fuel-to-air ratio and a small choke to adjust it.

And he can use his brakes when going downhill without the fear of stalling. Just how he has solved that remains another proprietary secret, but that solution and all others have been robust enough to allow Keith to claim that he’s “driven far enough to circle the world five times.”

It takes 16 pounds of wood to replace a gallon of gasoline. “In a day’s sawing, I have enough scrap to take a vehicle to California and back,” Keith said. By his reckoning, using wood as fuel is 37 percent more efficient than gasoline.

“I like to tell people that this Dodge Dakota gets 5,200 miles per cord of wood,” Keith said.

Keith carries enough fuel with him for long, cross-country journeys. But if he did out-drive his fuel supply, he wouldn't be stuck hunting for the nearest lumber yard, or harvesting roadside brush with his miniature chain-saw. As all things combustible are gasifiable, Keith’s vehicles can run on gasoline just as easily as they can on biomass. In a bind, he could head to the nearest self-service and fill up his hopper just as anyone else fills his tank.

Keith may be a character, but there’s nothing about his car that would reveal its oddball nature. “I pull up right into a restaurant and no one recognizes it as being any different,” Keith said. “I go all over putting on presentations and one question I ask is ‘Has anyone seen a wood burning vehicle?’ They say ‘no,’ and I say ‘Yes, you have.”’

Keith’s truck may be the first, but if oil supplies do run low, it probably won’t be the last.