I can hardly believe it, I missed a chance to see one of the coolest guys around give a talk on wood gasification. Wayne Keith was at KSU in Frankfort in November, he drove up from Alabama in his wood powered truck. Yes, it's really wood powered. 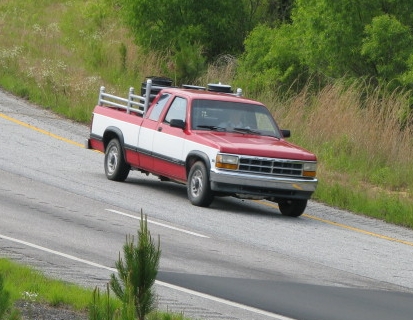 Wayne Keith has been gasifying wood in his trucks since 2005, he has converted six trucks so far. He has logged more miles on wood than anyone else in the nation at this point, and is not slowing down. Here's a bit of the article from KSU:

Wayne Keith leaned over and said, "What's the fastest you've ever been on wood?" For most people, the answer would be 0 miles an hour unless they were rolling down the river on a log. But Keith regularly clocks up to 80 miles an hour on his wood-fueled Dodge Dakota and hauls 40-foot gooseneck trailer loads of hay with his wood-powered Ford F250 on his 140-acre Springville, Ala., farm.

Keith was one of several presenters Nov. 19 at the Kentucky State University Land Grant Program's Small, Limited Resource, Minority Farmers Conference at the KSU Research and Demonstration Farm. One of the focuses of this year's conference was alternative energy, and as a former part-time farmer and full-time energy innovator, Keith was a prime presenter for the 160 farmers who traveled to Frankfort from across the Commonwealth.

The retired law enforcement officer turned full-time farmer and inventor showed off his creation, which gets 5,000 to 7,000 miles per cord of wood. Keith uses it as his everyday vehicle and said he drives more than anyone else who is documented to operate a wood-fueled vehicle. In one trip, he drove more than 7,000 miles on wood alone.

Here is a bit of how it works:

To operate his truck, Keith first lights a fire in the first tank using newspapers. Then, he adds the wood. He said he can basically burn anything except metal glass and rocks, but he prefers wood because it gets the best mileage.

The wood tank heats to about 3,000 degrees. That water vapor and carbon dioxide goes through a pipe where it mixes with incoming air in a second tank. From there, the process goes down pipes along the side of the bed of the truck and underneath to where the water is condensed and trapped. Then it is sent to the filtration tank, which is full of hay.

The water is cleansed and sent to the modified motor.

"So far I have not found anything that completely removes all of the soot, but I think a little soot is OK," Keith said.

He changes the loose hay about every three to four months and keeps a steady level of ash in the initial tank. Beyond that, he gauges the level of all of the tanks with dials that he can see in his rearview mirror. He knows the readings well enough to know when he is almost out of fuel and when he needs to tend to his tanks.

"Any vehicle alongside us doesn't even know we are any different," Keith said. "Most of the people around home don't realize I am doing this. They just think I am hauling extra weight."

The first time he starts his engine for the day, when the engine is cold, he usually starts it with gas and then quickly switches over to wood fuel using a lever beneath his steering wheel. He could wait much longer to let the vehicle run completely on wood, but it takes less than an ounce of gasoline to jumpstart the motor.