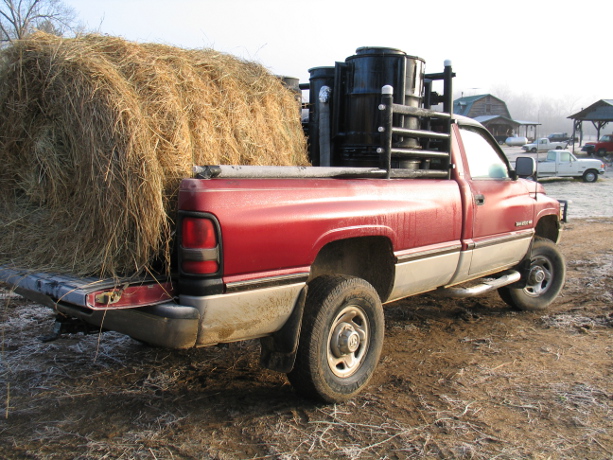 We hear a lot about “drop-in” fuels these days. While this term typically means an infrastructure-compatible liquid transportation fuel, Wayne Keith has come up with his own version of a “drop-in” fuel: wood, or any other biomass you can deliver in small chunks, that can literally be dropped into the down draft gasifier that powers his pickup. While a retrofit to the vehicle is necessary, Wayne considers this minor and does not worry about other infrastructure-compatibility issues, because he has more wood on his small farm than he knows what to do with.

I met Wayne in 2005. He owns a small beef cattle operation at Springville, Alabama, about 30 minutes up I-59 from Birmingham. During our first meeting Wayne told me that he used a rather large, very old Ford pickup to do a lot of his farm work, including transporting farm equipment, hay and cattle, and spreading fertilizer on his pastures. The problem was gas mileage: it was about 8 mpg.

So, way back when gas rose above $2.00/gal Wayne decided to do something about it. He knew that the Germans had figured out how to run their military vehicles with small wood gasifiers when they ran out of gas supplies in World War II. Since he had some experience with building wood burning stoves and working on cars, and had a small custom sawing operation which generated endless “slabs”, or off-cuts, that could be used as fuel, Wayne decided that this was going to be his first line of attack.

Fast forward: in 2011 Wayne officially broke the world wood gas speed record on the Bonneville Salt Flats in Utah, independently recorded at 71 mph, with the previous record having been set at 46 mph. And during the six years prior to this achievement, he gave me a sound lesson in Alabama country ingenuity.

Back to our first meeting: I had heard that Wayne was running his pickup on wood, so this is what I had come to see him about on his farm. In our initial discussion he told me that following graduation from high school he came to Auburn University to play football and study, but after a year he decided that this was not for him. He subsequently pursued numerous other interests, including farming, construction, and training security dogs and their trainers for law enforcement agencies.

I told Wayne that I knew about vehicles powered with biomass gasifiers, but understood that their power was limited to the point that they could reach a maximum speed of only 45 mph. I could tell that this comment frustrated him, because he immediately invited me to hop into the passenger’s seat and come for a spin. When the speedometer passed 80 mph on a windy country road I told Wayne that he had convinced me that my information was incorrect, and that I would prefer it if he slowed down since the truck did not have seatbelts.

From there it has been a fascinating journey. First, I was curious about what other fuel besides wood, this gasifier could use. Wayne assured me that he had mixed many different feedstocks with wood, including garbage and junk mail. We proceeded to test pelletized broiler litter, corn cobs and switchgrass cubes. All worked fine.

Without giving any of Wayne’s secrets away (and he has several), the technology essentially involves a down draft gasifier. Synthesis gas is then run through cooling and filtering systems and directly on to the carburetor. Depending on engine size, wood consumption is a little above or below one dry pound per mile, and the range is about 80 miles per gasifier-full of wood. Moisture content of wood should preferably be below 20%.

In 2008 Wayne registered to participate in a race for alternatively powered vehicles from Berkeley, CA, to Las Vegas, NV. At my request, he agreed to ride from Charleston, SC, to Berkeley, CA, and back on wood, to promote consciousness of bioenergy. Our plan was to get Wayne and his wood fired pickup onto national TV, but that did not materialize due to competition for media attention from a presidential election and a global economic crisis. Regardless, Wayne drove 7,300 miles on wood in his “biotruck” during a 3-week trip. We learned a lot along the way, and the trip attracted the attention of numerous local TV stations, as well as the New York Times.

Limited information on small gasifiers suggests that they do not work well at high altitude. However, Wayne again refuted this perception because we climbed over a 10,000-ft mountain pass in Yosemite National Park with no noticeable decline in performance of the biotruck.

Rules for the race included restriction to use of only an alternative fuel (no fossil fuels except for one gallon of gasoline at the start of the race) and no fuel purchases – fuel had to be scavenged along the way. Also, if participants were prosecuted for speeding during the race, they would be penalized or disqualified. The plan was to have a 3-day phased competition, with two overnight stops between Berkeley and Las Vegas.

Following the start, the biotruck slipped right round the corner and Wayne proceeded to cut up some discarded boards with his table saw powered from a gas electric generator which was fueled with syngas from the gasifier on the biotruck, instead of gasoline. In no time he had prepared enough fuel for the first leg of the race, and off he went.

He was in the lead to start with, but then the gasifier started to clog up repeatedly – something it had never done before. Eventually we discovered that the boards that were being used for fuel were redwood, and redwood does not burn very well. So lack of local knowledge cost the biotruck dearly on Days 1 and 2.

Determined to make up the lost time, Wayne took off fast with different wood as a fuel on Day 3, but was penalized by the race organizers for speeding at 80 mph through Death Valley, where the speed limit is 45 mph. We believe this was a violation of the rules by the organizers, because they had specified penalization only if participants were prosecuted for speeding, presumably by a law enforcement officer, and this did not happen. We concluded that the organizers were frustrated by the biotruck arriving at checkpoints before they did, to monitor the race in their gas powered vehicles.

Wayne came into Las Vegas first, but ended up second overall. However, he was awarded the prizes for the most innovative technology and the lowest carbon footprint. The car that received the first place award had a diesel engine that was run on new cooking oil obtained from stores by bartering race tee shirts for this fuel.

Since the first ever diesel engine was actually designed to run on vegetable oil, we really did not see much that was “alternative” about that option. Furthermore, allowing use of brand new cooking oil from stores, and not even insisting on used cooking oil, seemed like bending the race rules to us, which again emphasized incompatibilities between Alabama and California.

Obvious questions that come to mind for curious folks are how the efficiency of the biotruck compares when run on wood compared to running on gasoline, and what the emissions look like. Of course, the first question in this regard is how you measure mileage of wood as a fuel.

Wayne talks about miles per pound of wood, but that is not comparable to miles per gallon of gasoline. We concluded that miles per million btu would be the best basis for comparison. Several engineer friends said it was doubtful that the biotruck could achieve more than 50% of the efficiency of gasoline on this basis.

So we got Wayne to drive his biotruck for 40 miles at exactly 55 mph on a 2-mile test track at Auburn University, first on gasoline, then on wood. The result? When driving with gasoline as the fuel, performance was 20.95 mpg, or 168.6 miles per million btu, while for wood it was 231.6 miles per million btu, or equivalent to 28.78 mpg: an improvement of 37%! And tailpipe emission tests show that the biotruck meets the emission standards required by California, which are the most stringent in the nation.

Wayne has now retrofitted several pickups to run on wood, showing an initial preference for Dodge Dakotas, and he has traveled well over 100,000 miles on wood in these vehicles. Each retrofit has resulted in improvements. In September 2011 he officially broke the world wood gas speed record on the Bonneville Salt Flats in Utah, increasing it from 46 mph to 71 mph. Since then he has undertaken yet another retrofit, but this time on a Dodge Ram 2500.

Without question, wood is the ultimate drop-in fuel for Wayne, and I strongly suspect he now has his eye on 100 mph for his next shot at the world wood gas speed record.