One Man’s Journey In Powering Trucks With Renewable, Natural Resources 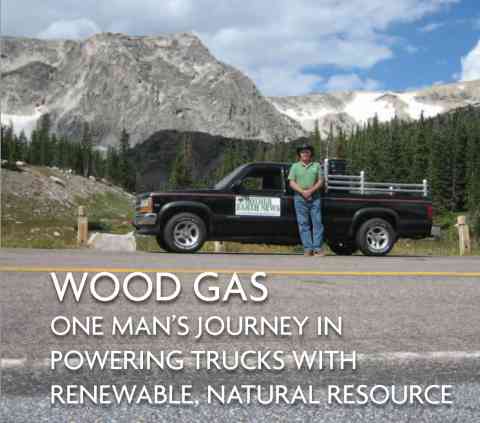 With gas prices currently pushing around $4.00 per gallon throughout the country, an Alabama man is utilizing the renewable natural resource NHLA members love so much as a means to get him around. Wood. Wood gas, to be exact.

Throughout the years, Wayne Keith has been a do-it-yourselfer, but in 2004, he took his skills to a new level by modifying his first pickup truck to run on wood chunks.

"Gasoline prices kept going up and up. I drew a line in the sand - if they went to $150 per barrel, I would pursue my thoughts on gasification… I realized how dependent I was on petroleum," Keith said.

"Back in the mid 70s, during the oil embargo, the price of gasoline shot up. Even with that, we were having trouble finding stations that had gasoline. I’d heard rumors that during WWII some vehicles in Europe were modified to run on wood chunks or coal. I read about a truck that was being tested that ran on wood, so I began experimenting," Keith said.

"I started tinkering by putting wood in a small closed container and making a hole in the top. I would heat the container with a welding torch and the opening would begin to smoke. I could light the smoke or gas and it would burn like a candle. I could put this container in any source of heat and run a tube from it, light it and maintain a flame. I guess this is the most primitive form of gasification, being able to have a heat source in one place and pipe the energy to a different location. I made a few attempts to run a lawn mower from the experiment, but had very little success."

When prices went back down, there was plenty of gasoline and diesel available. The availability and cheap prices led to Keith abandoning his project. But, once they went back up decades later, he rekindled his desire to produce a wood burning vehicle.

As the founder and owner of his own logging operation and sawmill, Keith had plenty of access to sawmill slabs. He slices his wood with a homebuilt chunker, powered by a small tractor.

And unlike his sawmill operation; Keith measures the wood he uses for fuel in miles per pound, rather than board feet.

Any species will work, but hardwoods give better mileage due to their density. However, performance is not affected by wood density. Due to his location and timber supply, Keith burns mostly pine and oak. Recently he’s been testing Paulownia wood, which also burns well.

Nearly all of Keith’s trucks have been Dodge, not out of loyalty, but because they offer larger engines for the size of the truck. Keith prefers the V8 Dodge Dakotas for highway drivers because he said they are sufficiently over-powered. Wood gas conversions lose about 30 percent of the original horsepower, so it helps to have some extra to start with. Most of the lost power could be regained by raising the compression ratio.

Keith said tests performed at Auburn University show his trucks are 37 percent more efficient on wood than on gasoline. They go the same distance on 16 pounds of wood as they do a gallon of gasoline. Keith’s conversions include the following trucks, which have registered more than 250,000 miles:

Wood gas is compatible with any gasoline engine and with some extra work will run a diesel. Keith builds a gasifier unit, including the gasifier, heat exchanger and hay filter. He surrounds it with a rack, which cools the gas and takes it to the motor. Provisions are made to collect condensed moisture and ashes from the gasifier, which only require periodic cleanouts.

The only modifications to the engine compartment are to bring the wood gas up to the motor through pipes, into the air cleaner and regulate the secondary air with an adjustable valve- maintaining the proper fuel/air ratio. Timing is automatically advanced by the vehicle’s computer. The same throttle is used for both wood and gasoline. Keith can switch on the gas instantly, if needed.

To start up, Keith lights the unit and adds wood. Blowers mounted under the truck give draft to the fire and start heating things up. The engine is started on gasoline and quickly switches over to 100 percent wood gas, continuing to stoke the fire with its own suction. Within a mile, Keith is at full power and able to exceed all legal speed limits without using gasoline.

The overall cost of the conversion is not as much as one may expect.

"Material costs vary wildly depending on how much you can use salvage materials. I have about $3,000 in each conversion, plus about 250 hours of labor," Keith said.

Keith’s reasoning for using wood goes beyond the price at the gas pump.

"Wood gasification is carbon neutral because the wood emits the same CO2 during decay as it would being burned in an engine- use it or not, it makes no difference to the overall carbon emissions. Fossil fuels have been locked away for so long that releasing that carbon has major implications on the environment," Keith said.

"Wood is a renewable fuel which can be replaced in a short period of time instead of millions of years for fossil fuels. Fast growing species harvested regularly can keep a truck on the road using only a few acres per vehicle. We can’t replace the entire United States fl eet. But a significant impact could be made in rural areas," Keith added.

Although Keith’s modified trucks are only for his personal use and as prototypes, he does encourage wood gas usage. Those interested in learning more or working to modify their own vehicle can obtain information, assistance and full tech support through his website – driveonwood.com.