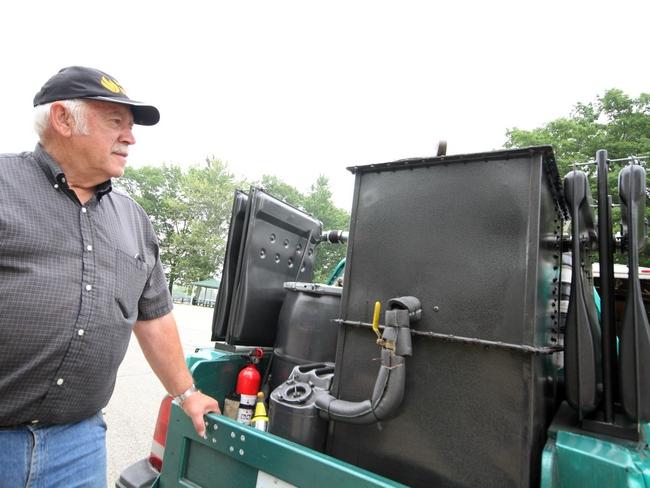 Holland, Mich. Instead of measuring miles per gallon like most motorists, Zeeland Township resident Don Mannes measures mileage by miles per pound of wood burned. Two miles per pound of wood burned on average, Mannes said. Mannes, 71, the owner of a modified 1995 Geo Tracker, can run his small green sport-utility vehicle by using nothing but carbon monoxide and hydrogen gas created by burning wood in a specially modified assembly on the back of vehicle. Joining approximately 50 other owners across the country that operate wood-gas powered vehicles, Mannes’ vehicle is his first attempt at such a contraption, a so-far successful “test-bed.” “What got me started was getting calls of people burning leaves in neighborhoods,” said Mannes, who serves as the Zeeland Township Zoning administrator. “I got to thinking that there’d probably be a better way to burn (wood) without smoke. So I got on the Internet and learned about gasification. The further I got into it I found out they were running cars on wood before World War II.” With a bevy of containers, Menards PVC piping and a few other homemade devices attached to the rear and engine compartment of his Tracker, Mannes’ wood-gas powered vehicle capitalizes upon heat, wood and then gas that’s piped to the Tracker’s engine. Sticking a blowtorch into a reservoir piled with wood and starting a fire in a large reservoir, called a double-wall reactor, mounted to the rear of the vehicle starts the process. 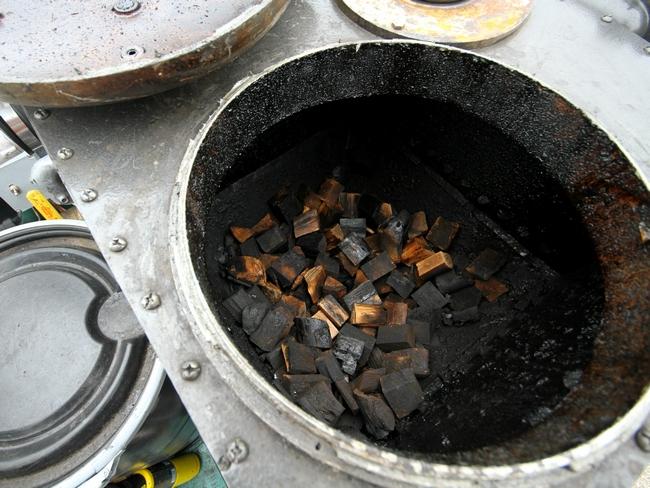 As the wood burns, generating heat that approaches 2,600 degrees after about four minutes, carbon monoxide and hydrogen gas is piped through four heat exchangers and then into a barrel filled with straw or hay. The straw or hay within the barrel is the final “purification” step for the carbon monoxide and hydrogen gas before it is pumped to the engine and ignited to power the Tracker. Instead of releasing harmful emissions that could further contribute to existing environmental issues, a wood-gas powered automobile creates waste that can be spread around a garden, Mannes said. Unscrewing two plugs near the bottom of the double-wall reactor, Mannes can empty ash residue that collects as a result of the burnt wood, which can then be added to a garden which provides increased nutrients for plants, Mannes said. The Tracker, which can also run on gasoline, retains most of the power available while burning either wood or gas. “I get 96 horsepower on gas and about 80 on wood-gas,” Mannes said. “It likes 55 miles per hour. A hopper full of wood will run me 100 miles.” The Tracker, which has more than 239,000 miles on it, was rolled out in August 2014 after Mannes purchased it in January 2014. 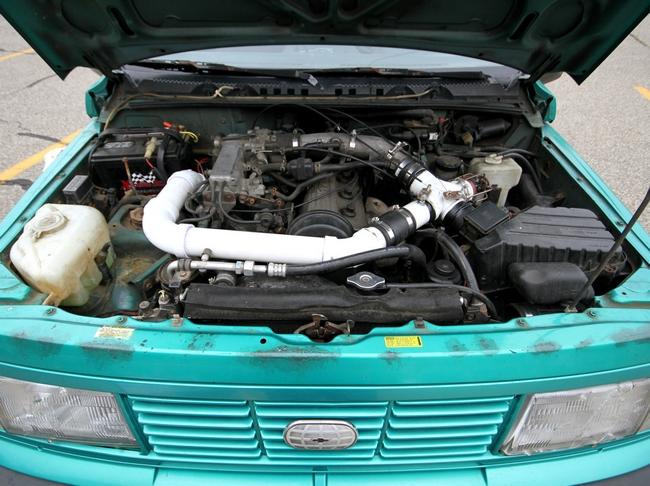 Instead of only driving the car to shows and giving tours to interested individuals, Mannes makes a habit of driving the vehicle regularly and has put a couple thousand miles on the Tracker. “A lot of people can’t believe it’s even possible,” Mannes said. “You could almost be self-sufficient with wood.”